“Mon Dieu, what are they thinking?”

Jane Eyre In Our Midst

Madama felt like reading a good book and was perusing my shelves. She chose Charlotte Brontë’s Jane Eyre which was written after her time.  A few hours later I brought her some tea and found a tear slowly edging her cheek.  Sitting next to her, I inquired what was wrong and she said she so understood Jane’s terrible loneliness and ostracizing.  Madama lost her parents quite young and had to work as a maid at the home of the Baroness.  It was a difficult journey to claim her place in the world.

There are so many children even now who lead lives of desperation and hardship. 50% of international human trafficking are children, according to UNICEF with over 100,000 in the US alone.  They are often invisible and we can’t change what we don’t see.

Madama hopes we can deepen our awareness and compassion for so many of the world’s children.  Jane Eyre walks among us as does the cruelty that battered her spirit.

The fight to survive can also fuel change and brings those in our midst who no longer tolerate the abuse of others.  Madama comes to encourage us to evolve our compassion. As one who suffered as an orphan, she invites us to open our doors and resources to enlarge our family.

(Learn about Madama's full story in the ebook:

Madama Phloozé and her pet, Peeves 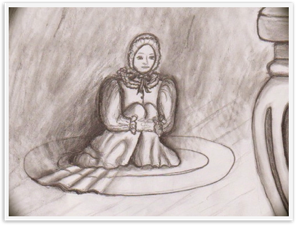 “Ordinarily, Madama is a very pleasant person but there are a few manner faux pas’ and ethic violations that unhinge her and drive her nuts.  Join her as she shares how to make our world a more civil place.”